Which Arthropodiums grow well in Auckland?

This report details the results of an Arthropodium trial undertaken at Auckland Botanic Gardens (ABG) to identify the top performing cultivars for Auckland conditions. Evaluations focused on assessment of overall ornamental merit, and severity of red bacterial leaf spot and snail/slug damage

Arthropodium cirratum (rengarenga or NZ rock lily) is a New Zealand native that is commonly used in amenity horticulture and home gardens. They thrive in shady places and perform well in dry soils such as under trees, and they are often used in mass plantings. They provide effective groundcover, being evergreen and requiring minimal maintenance.

In the last few years bacterial leaf spot has become more obvious on rengarenga. It develops a red colouration on the foliage, a defence to protect the leaves after a light infection (in this case bacterial leaf spot) where flavonoids, the important group of plant pigments found in petals and foliage, such as anthocyanin, are produced by the plant to minimise UV damage to the plant. This red colouration also develops after frosts. 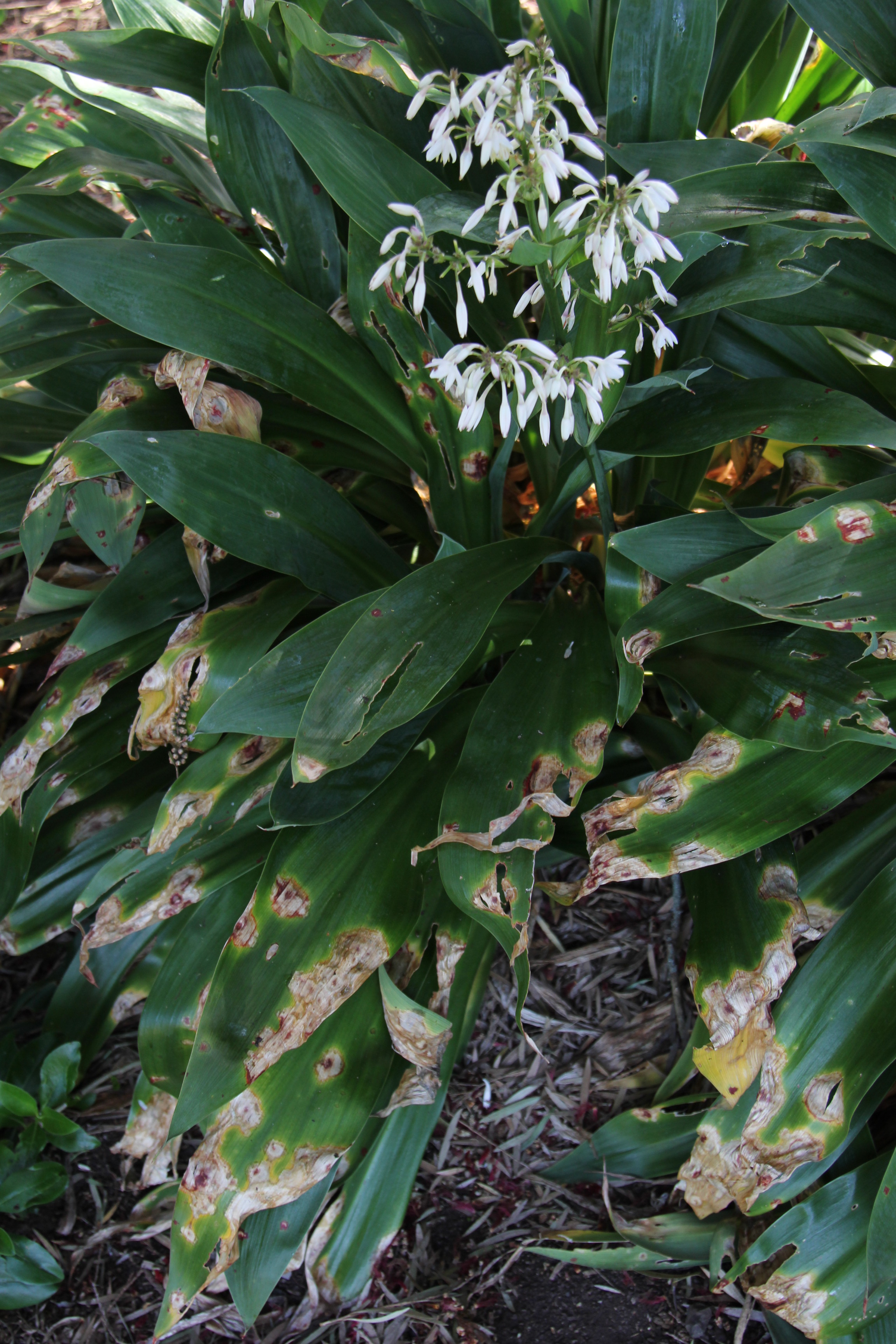 The trial was planted in May 2012 in a shady bed under Callistemon in the ABG trial garden. Three plants each were planted of most varieties; however some had just one or two plants. An annual application of blood and bone was applied in autumn and mulch applied as required. Deadheading occurred after flowering but before seed set in late December. Spent leaves were removed at the same time as deadheading in mid-January. Slug and snail bait was applied during spring and summer from 2012 to 2015. In the final year of this trial no slug and snail bait was applied. NPK fertiliser was applied in May 2015.

Data collection commenced in July 2014 with weekly flowering records and quarterly assessments of pests and diseases. Pests and diseases assessed included mollusc damage and bacterial leaf spot. An estimate of the percentage of the plant affected were recorded and averaged at the end of the trial. Flower display, flower colour and foliage colour was recorded once during the flowering period. Height and width of each plant was measured and averaged. Height of the plant was measured from the base of the plant to the highest part of the foliage. Width of the plant was measured across the widest part of the plant. Each variety was given an overall rating based on both pest and disease observations at ABG by an internal evaluation panel. The overall rating (1 = poor performer and 10 = excellent performer) was used to determine the list of top performers. Cultivars that scored 8 or more are considered top performers and are recommended for growing in Auckland based on the results of this trial (Table 1).

The trial ran for 5 years and was concluded after flowering in January 2017.

Table 1. Summary results of the 20 Arthropodium varieties comprising habit, size, flowering period, significant pest and disease issues and overall plant performance rating. An upright inflorescence is when the flower spike is vertical and flowers are held above the foliage.

*NB: A. ‘White Knight’ was rated 8 but has not always performed to this level over the many years it has been grown at ABG. 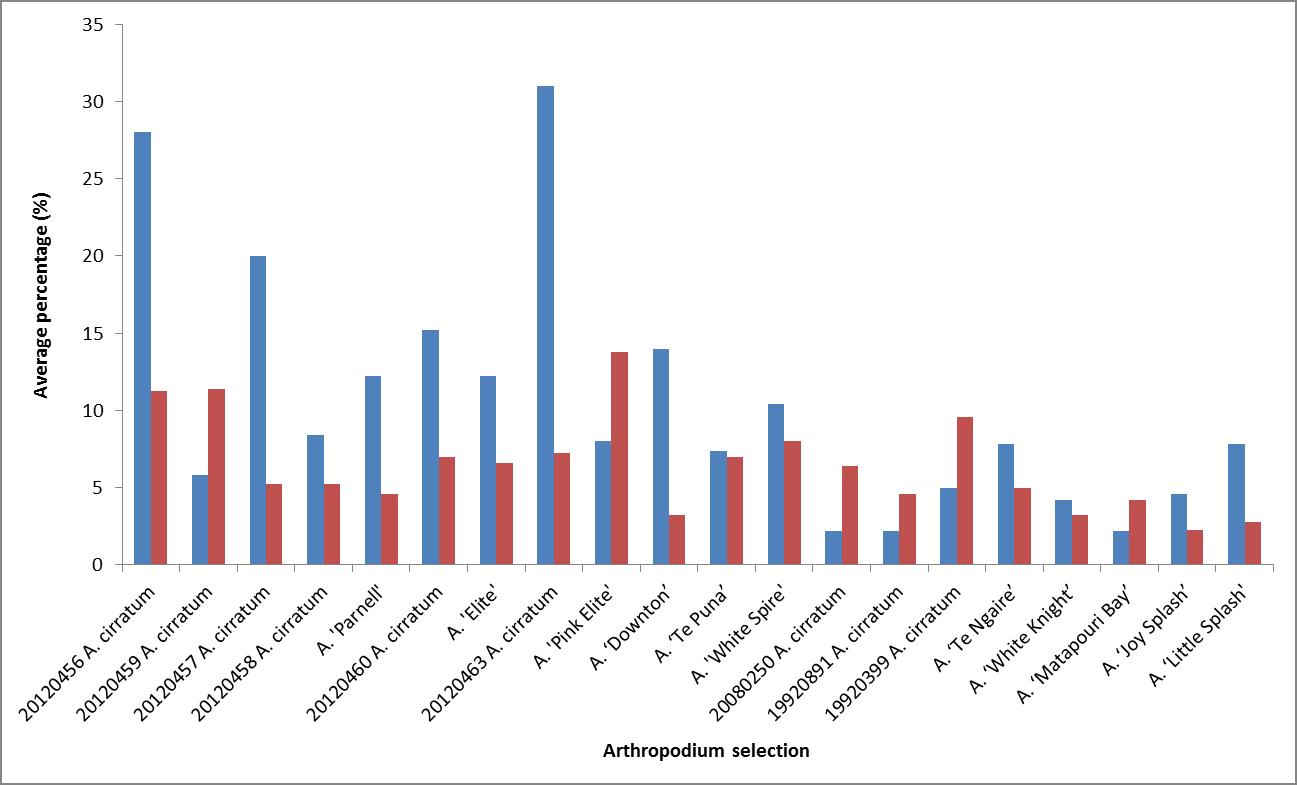 A potential variable environmental factor in this trial was that not all light levels were equal for all cultivars. This may have affected their susceptibility to pests and diseases.

Cultivars of A. bifurcatum that performed well included ‘Matapouri Bay’, ‘Parnell’ (originally collected from Parnell Rose Gardens by Jack Hobbs and Graeme Platt), and ‘Downtown’ (collected by Hobbs and Platt from traffic islands in Quay St, Auckland.) ‘Downtown’ is commonly marketed erroneously as ‘Avalanche’. We also recommend A. ‘White Knight’, however we would like to emphasise that A. ‘White Knight’ will only do well in specific locations. A. ‘Downtown’ can easily be divided vegetatively and can be multiplied in this manner more rapidly than most Arthropodium.

In our trials we have found that forms of the recently described offshore island species A. bifurcatum make the most impressive plants for amenity use. These typically are taller and more vigorous than most mainland forms with an attractive glaucous hue on the upper surface of their relatively thick and wide arching foliage. In most cases their influences are taller, more upright and overall more impressive than those of many A. cirratum forms.

A. ‘Matapouri Bay’ is the most widely commercially distributed/available offshore island form. However it is very variable in form as it appears to generally propagated by seed, possibly from many plants around Mataporui Bay, Northland, rather than from a specific location or plant. A. ‘Little Splash’ was the only significantly small Arthropodium variety in this trial that is commercially available. It would be suitable for a small home garden or courtyard. We noted that ‘Joy Splash’ does not create an effective groundcover compared to other Arthropodium varieties.

In table 1 we have noted accession numbers (unique eight digit number linked to the ABG plant database) next to some unnamed cultivars of A. cirratum so that we can differentiate them from each other. Collection information including the supplier of that specific plant can be identified for those interested. All star performers are cultivars commercially available.

Arthropodium are best planted in dry shade. Sun may enhance the production of anthocyanins which causes red spots on damaged leaves. Some of the plants that scored less than 8 may perform better in more shade than they received in our trial. Old spent leaves can be removed and flower spikes deadheaded after flowering.