SunPatiens: are they resistant to sun scorch?

Impatiens are excellent performers for annual bedding displays providing a burst of colour particularly in shaded spots. Auckland Botanic Gardens (ABG) regularly uses Impatiens in annual bedding and is very interested in increasing our palette of high performing varieties. Currently we use Impatiens from the Accent, Expo and Super Elfin series. In summer 1992-93 ABG trialed Impatiens Expo and Super Elfin series (unpublished data, ABG). All cultivars flowered for 11-12 weeks but were noted with sun scorched flowers, with ‘Expo Red’ being the one that scorched the least.

We have not regularly used New Guinea varieties because of their variability in vigour and their lack of sun tolerance which results in sun scorch of the petals. The introduction of New Guinea cultivars in the Sunpatiens® series enabled us to test whether Sunpatiens®, marketed as sun tolerant, would meet our top performer criteria. New Zealand’s UV levels are high (New Zealand’s Environmental Reporting Series) and often exceed extreme UV levels on summer days. Auckland has higher UV levels than Invercargill, Otago, Christchurch and Wellington (NIWA).

Our objective was to determine whether Sunpatiens® would be a better selection for high visibility annual beds at ABG. All plants for these areas must qualify as a top performer e.g. that it suffers no to only minimal floral fade, sustained flowering, 100% survival, reasonable size and dense habit to reduce weeding, flowering starting as early as possible, need little or no dead-heading and no/minimal pest and diseases issues.

We assessed Impatiens cultivars in this trial on the following criteria: earliness into flower, continuity of flowering, flower size, scorching of blooms, pest and disease resistance, height and spread of the plants.

The trial began in November 2015 and plants were removed in March 2016. The duration of the trial reflected the exact times that annuals are used at ABG during summer displays. Six cultivars were trialled (Table 1) including 3 red forms of Sunpatiens® and 3 different red cultivars of I. walleriana from series with proven performance for Auckland conditions. Bright red forms were chosen as the annual beds where Impatiens are planted at ABG is used to accent the summer flowering pohutukawa nearby.

The Sunpatiens® series are only sold as potted colours (not seed) currently and were supplied in 1.5 litre pots. In order to fairly compare the Sunpatiens® to the other cultivars in the trial, the three other cultivars were also planted at this size. This would not ordinarily be how ABG would use them as annual bedding plants, usually planted as plugs.

Table 1 Habit of cultivars in the trial

The trial was located in raised beds (4m x 2m) in the trial garden at ABG. Eight plants of each cultivar were planted, except for ‘Spreading Carmine Red’ and ‘Vigorous Magenta’ which required greater planting spaces and at maturity were larger than other cultivars therefore only had four plants each in the trial. Plants were in full sun and Biofert was applied to the soil before planting.

Weekly flowering observations were recorded, starting at planting day, to determine earliness into flower & continuity of flowering. Monthly assessments of flower colour, scorching of blooms and powdery mildew were recorded. Scorching of blooms was recorded by the percentage of flowers scorched using this scale: 1 = no obvious scorching, 2 = 25% of flowers on plant are scorched, 3 = 26-50% scorched; 4 = 51-75% flowers on plant are scorched; 5 = 76-100% scorched. Flower sun scorch was not measured during November as plants had not started flowering. Flower colour was determined using the Royal Horticultural Society (RHS) colour charts. For powdery mildew the average percentage of plants with powdery mildew was recorded. Only once when plants were at maturity, flower size, height and spread of the plants was measured. 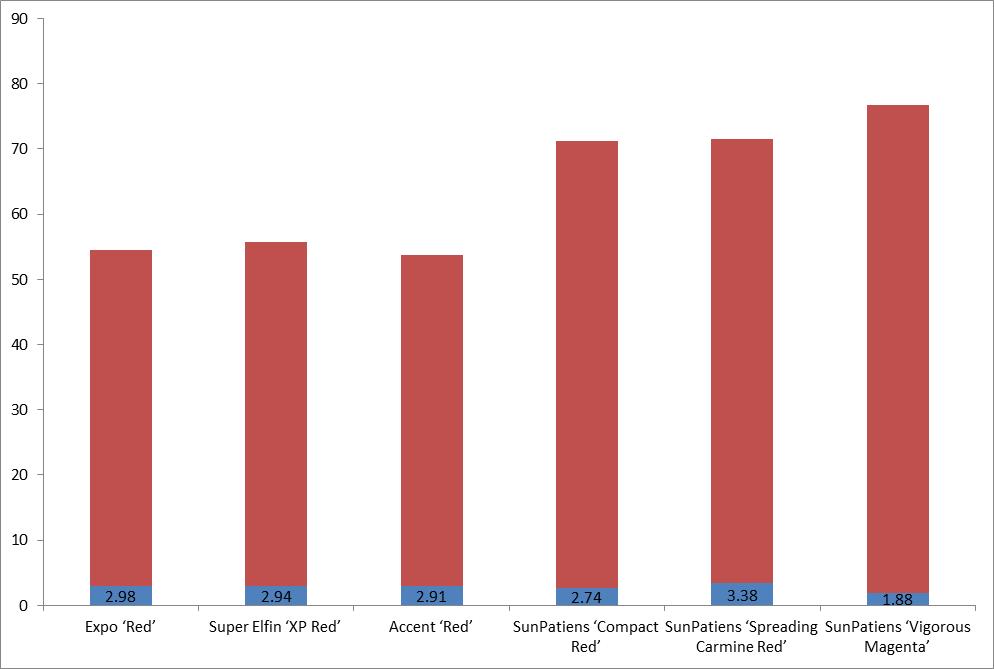 Figure 1 Flower size (mm) of Impatiens cultivars (red) and average degree of scorch on a scale (blue) of 1(least) to 5 (most).

Flower colour stayed consistent throughout the trial. Sun scorch showed itself as patches of white ‘bleached’ petals rather than a dulling or change in the RHS colour type. All cultivars suffered sun scorch with at times up to half of the flowers bleached and only one, Sunpatiens® ‘Vigorous Magenta’, had less than 25% of the flowers bleached. Sunpatiens® ‘Spreading Carmine Red’ was the most affected by sun scorch however the variation between months was the smallest (3.4 ± 1.8 SE) of any cultivars trialled. Impatiens ‘Compact Red’ had the most variation in average sun scorch (2.7 ± 0.54 SE). For ‘Expo Red’, ‘Super Elfin XP Red’ and ‘Accent Red’ the amount of sun scorch gradually decreased every month until the end of the trial when it increased slightly (Table 2). In contrast there was no trend in sun scorch through the trial in Sunpatiens® cultivars.

All plants of all cultivars in this trial remained pest and disease free. There was no powdery mildew found on any of the plants. Towards the end of the trial, plants of ‘Accent Red’ showed yellowing leaves and die off in the centre of the plant, which could have been be due to lack of watering as the trial wound up. ‘Expo Red’ and ‘Super Elfin XP Red’ had two plants recorded as dying off by mid-March.

Sunpatiens® ‘Spreading Carmine Red’ and Sunpatiens® ‘Vigorous Magenta’ plants were significantly larger than the other four cultivars in both height and width (Table 3).

All plants in this trial plants performed well in terms of remaining pest and disease free with profuse, long flowering and stable flower colour. Sunpatiens® have larger flowers than any other cultivar in the trial. Sunpatiens® are larger plants which is an advantage in an annual bedding situation because it reduces the overall number of plants required in turn so costs as well as planting times and in addition larger plants minimise weed invasion.

All Impatiens flowers in this trial suffered bleaching or sun scorch from UV light. Sunpatiens® ‘Vigorous Magenta’ suffered the least bleaching by the sun of any Impatiens in this trial. However Sunpatiens® were not uniformly better at performing in the sun as the most sun scorch in the trial was also detected on this series (Sunpatiens® ‘Spreading Carmine Red’). The large size of the Sunpatiens® flowers did magnify the effect of the bleached areas of sun scorch. At this level of sun scorch plants look acceptable from a distance as a mass planting but close up high levels of flower scorch were visually dominant.

After data collection had ended and autumn approached we did notice that sun scorch on all cultivars declined markedly. This slight change in environmental factors (more rain, lower night time temperatures and presumably less UV light) reduced the percentage of bleaching petals. We would recommend home gardeners can grow Sunpatiens® particularly to peak in March-April where they are likely to remain covered in scorch free flowers. However, for the purposes of annual bedding at ABG, peak flowering display is required from December to February and Sunpatiens® would not be suitable for this purpose. We suggest that the Sunpatiens® series would be suitable in a site that gets some shade during the day during peak summer. The Royal Horticultural Society (RHS) conducted a similar trial in 2014 and concluded similarly in terms of sun scorch to ABG.